Last year, a friend gave me his SHIELD TV when he moved. He worked at NVIDIA and got it for free and had used it only a handful of times before it traveled from his closet to my own. I had forgotten about it until I had a need for a Raspberry Pi and discovered that they were all still sold out. Wouldn’t the SHIELD TV make a great RPI replacement? It has been out for almost a decade now and surely people have gotten Linux working on it. After following a guide from 2015, I quickly bricked the device trying to flash an outdated DTB file. It turns out that a bad DTB brick was quite common in the community and unfortunately the only proposed solution of “return it to Best Buy” was not an option for me. Even though I have never cared about this device, I was still ashamed at my negligence and felt guilty about creating more e-waste. Thus began my journey to recover the device.

I needed to figure out why the device was not booting and a UART console usually provided diagnostics information. Some devices (such as the Kindle) even have recovery options available over the serial port. A quick probing of suspicious looking pads on the logic board yielded no results but luckily, people in the Linux thread have already found the pins. I was able to solder some wires to the pins and get a serial console. 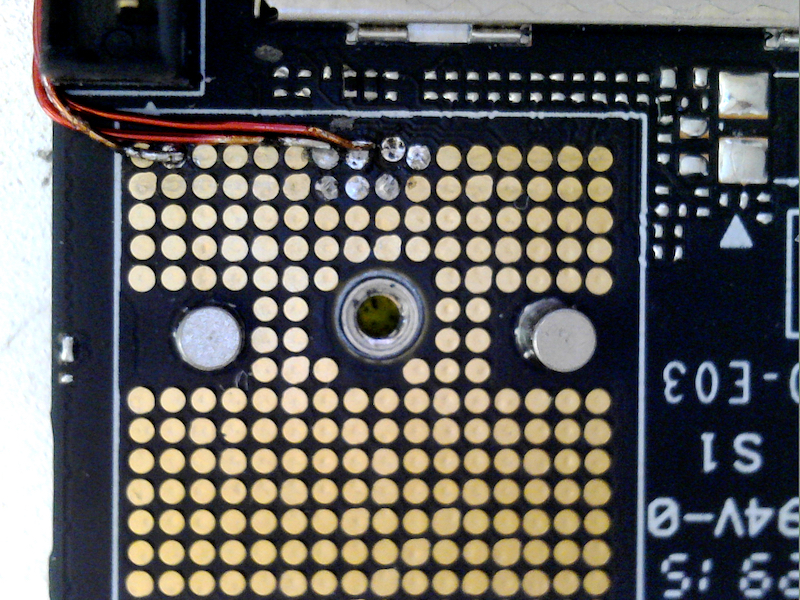 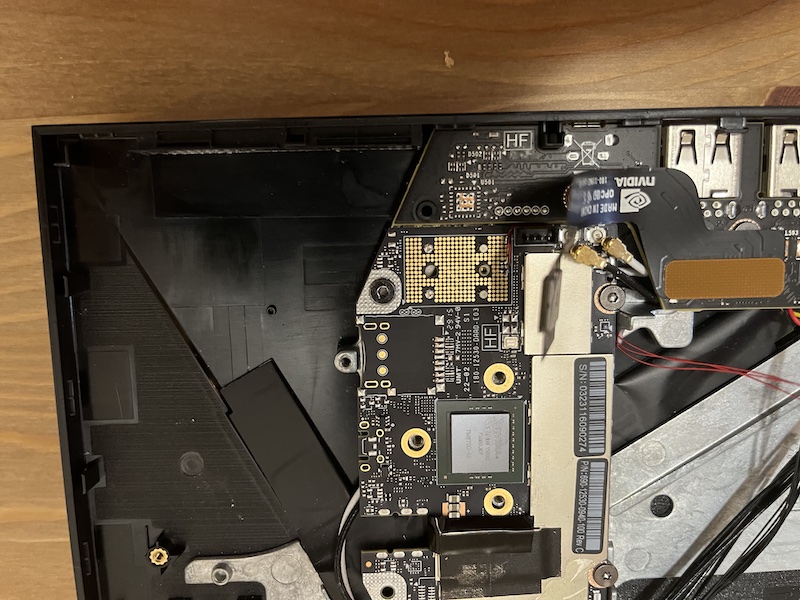 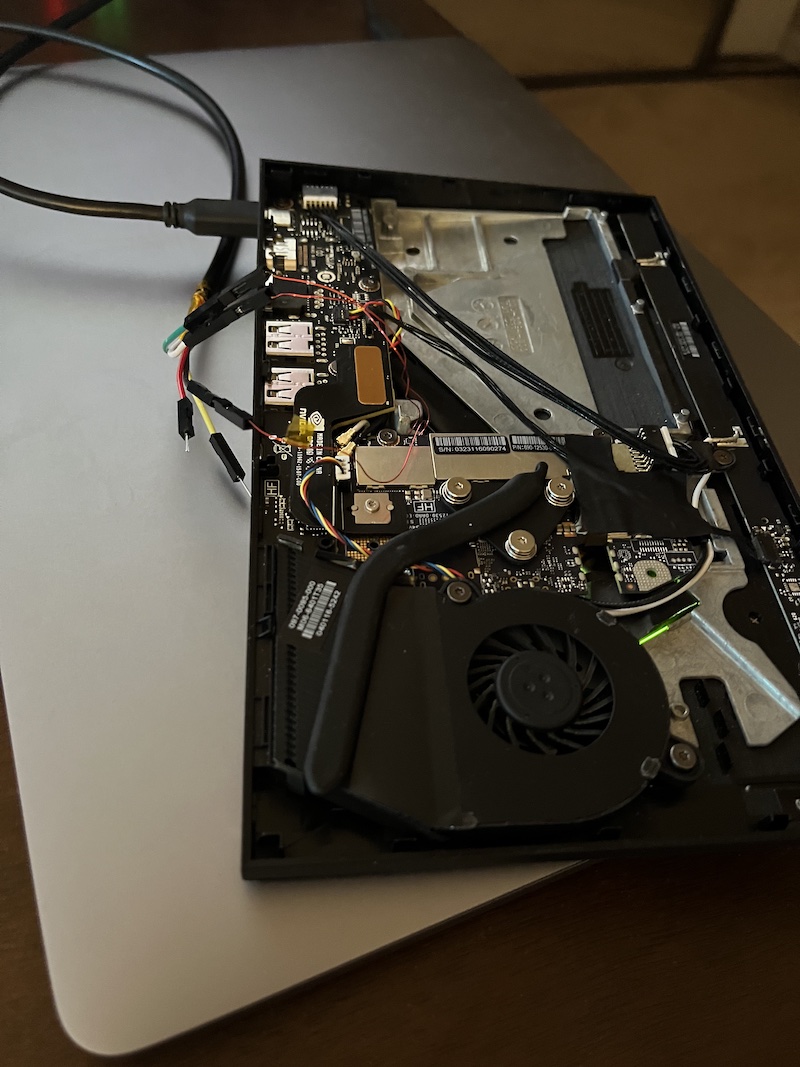 Unfortunately, there was no recovery option available in the console but from the logs I was able to understand the reason why the SHIELD TV no longer booted. I flashed a DTB (device tree blob) designed for an older version of cboot. Therefore, when cboot tries to setup some device with the wrong configuration, it ends up in a dead-loop.

On Tegra devices, there is an emergency recovery option called APX mode. This is implemented in the boot ROM (so it can never be corrupted) and uses NVIDIA’s RCM protocol to communicate. According to some reverse engineering done by @ktemkin, there are three ways of entering APX mode:

Of these options, 1 is unavailable because the boot-loader is indeed valid (and signed) and the processor dies while already running that boot-loader. I spent some time with 2 by trying to short a random sampling of pads on the logic board while attempting to boot (with no luck). 3 is not an option because we need to run software. After chatting with famous Switch hacker @plutoo, he suggested I short out the eMMC while booting to force condition 1. This seemed like a promising route because I remember seeing some unfilled pads near the eMMC. I used a pin to short one of them to the shielding near it and saw the APX device show up on my computer. To make things less painful, I soldered a piece of wire to one of the pads and attached it to a pin I can easily ground. 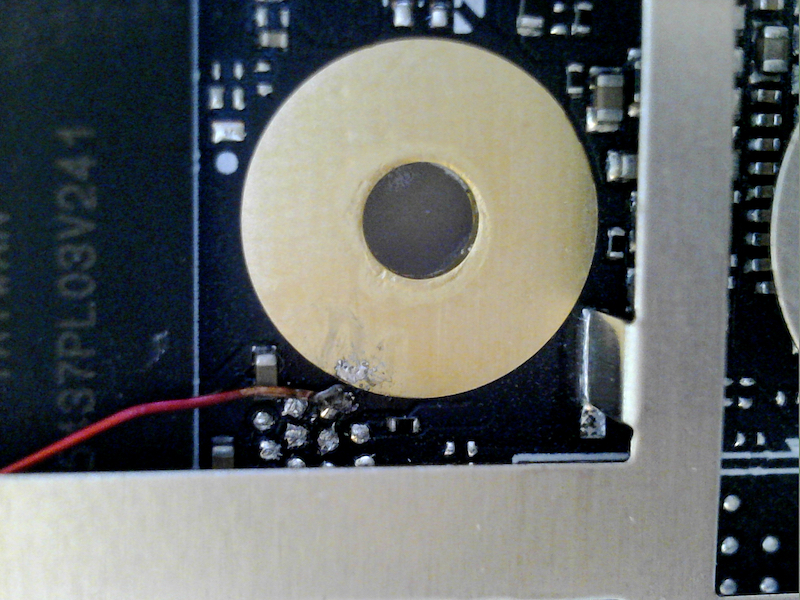 At this point, you may wonder why I didn’t just re-flash the eMMC and the main reason is that I didn’t have the patience to find the correct signals (CMD/CLK/DAT0) and solder to those tiny pads all clumped up together (I also don’t own any micro/nano soldering equipment so I have to do everything with a standard tip iron). The second reason is that it would have made for a boring blog post 😅.

Getting into APX mode was the first step. NVIDIA designed the USB RCM protocol to only accept signed messages on production fused devices. The key is held by the device manufacturer, which means that only NVIDIA factories are allowed to unbrick the SHIELD TV. However, a few years ago, some researchers discovered a vulnerability in the boot ROM USB stack in the same Tegra X1 chip used in the SHIELD TV and used it to hack the Nintendo Switch. This vulnerability can be exploited to run arbitrary code in the boot processor. The Reswitched team has released a tool to exploit this vulnerability and some other people have since modified the tool to debrick older Tegra devices.

Putting it all together…

The plan is as follows:

The original “Fusée Launcher” did not work on my SHIELD TV likely due to some hard coded offset differences with the Nintendo Switch. Instead, I used the fork from @jevinskie for older Tegra devices which added an offset finder (leaked from dumping a stack frame). I patched in the original offsets for the X1:

Next, I downloaded @ktemkin’s non-secure RCM enable payload and put it in the same directory. I also made the following changes (the original patch did not cover some other code paths that checks the security fuse bit):

Finally, I modified the Makefile in fusee-launcher to build the new payload:

Then make clean; make will build the payload and ./fusee-launcher.py -w -V 0x0955 -P 0x7721 ipatch_rcm_sample.bin will run it (after waiting for the APX device to show up). The serial port should print out:

Next, I needed the stock firmware to recover to. Luckily, NVIDIA provides stock recovery images for the SHIELD TV. I downloaded the 9.0.0 recovery image for my SHIELD TV (2015) and extracted the .zip file. Next, I had to extract two files from blob which contains the boot-loaders and other data. Opening the file in a hex editor, we see the name of the partitions in ASCII listed in order. By guessing and checking I discovered the structure for each entry is something like: 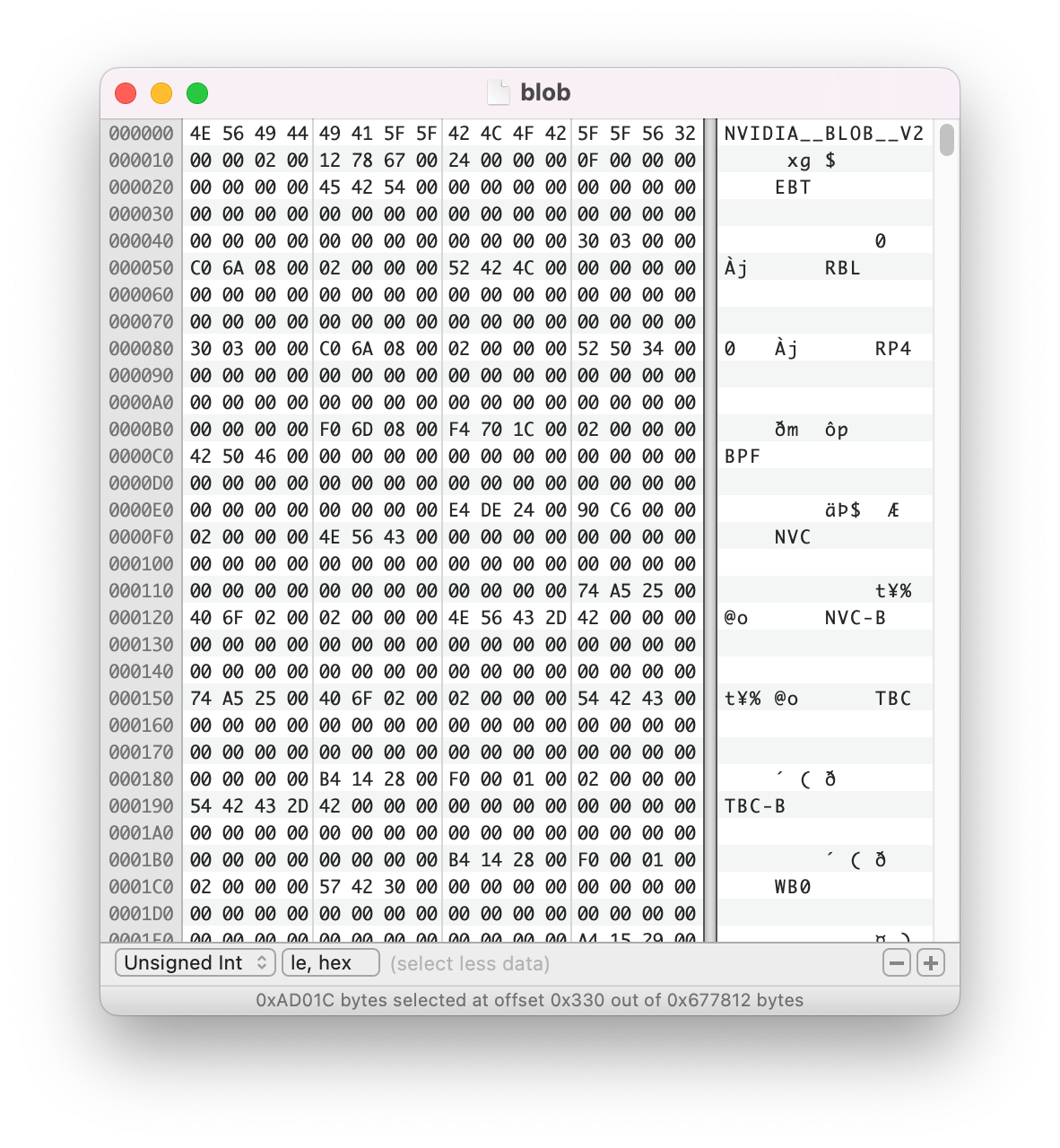 Next, I downloaded Linux for Tegra R24.2.3 driver package which contains the tegraflash.py tool. I placed the files I extracted from the firmware in /bootloader.

I first dumped the corrupted DTB:

Because the broken DTB I flashed was smaller than the working one, I was able to find the remaining bytes of the original DTB in the dump. I used this to match the bytes up to shield-9.0.0-dtb2.bin which I then flashed:

Here is the console output when flashing the DTB:

With that, I was able to recover successfully and boot back into fastboot and Android TV. (The first time in my life I was happy to see the Android logo.)

Some other notes for anyone who wishes to attempt this: