Recently, I stumbled upon an old cable modem sitting next to the dumpster. An neighbor just moved out and they threw away boxes of old junk. I was excited because the modem is much better than the one I currently use and has fancy features like built in 5GHz WiFi and DOCSIS 3.0 support. When I called my Internet service provider to activate it though, they told me that the modem was tied to another account likely because the neighbors did not deactivate the device before throwing it away. The technician doesn’t have access to their account so I would have to either wait for it to be inactive or somehow find them and somehow convince them to help me set up the modem they threw away.

But hackers always find a third option. I thought I could just reprogram the MAC address and activate it without issue. Modems/routers are infamously easy to hack because they always have outdated software and unprotected hardware. Almost every reverse engineering blog has a post on hacking some router at some point and every hardware hacking “training camp” works on a NETGEAR or Linksys unit. So this post will be my rite of passage into writing a “real” hardware hacking blog.

Getting access to a shell was laughably easy so I won’t even go into details. In short, I Googled the FCC ID found on the sticker and found the full schematics for the board along with part numbers of all the chips (such information is required in the FCC approval process but most companies request that it be kept confidential). Through the schematics, I found the UART console, which was nicely exposed through some unfilled port. In fact, I did too much work here because after opening the device up, I found the word “CONSOLE” printed on the solder mask right next to those ports. After soldering some headers to it, I was able to connect it to my Raspberry Pi and enter the root shell without needing any password. The whole process took about an hour–the most time being trying to physically open the plastic shell because (and this may be surprising) hackers are not the epitome of physical strength.

Once I got a shell, I dumped the flash memory and I grepped for the MAC address printed on the label (trying hex, ASCII, and different separators). I found a file in a partition labeled NVRAM containing the MAC address. The file does not appear to have any checksums, so I just replaced it with a new MAC, rebooted and… nothing. The modem refused to establish a connection. That’s when the real work started…

The first clue was looking around in the NVRAM partition and finding a set of certificates signed for the modem’s MAC address. Googling “DOCSIS certificate” led me down the rabbit hole of modem cloning, service stealing, bandwidth unlocking, and so on. I learned about how not too long ago, people would modify their modem configuration files in order to unlock higher speeds than what they paid for (if anything at all). As ISPs clamped down and secured their infrastructure, the hackers moved on to “cloning” modems by finding the MAC address of an existing subscriber and reprogramming their modem to use the same MAC address in order to steal service. As a result of all this, the DOCSIS 1.1 specification established a PKI system of validation for MAC addresses.

First, I generated a set of self-signed certificates for my new MAC address. Surprisingly, I was able to provision the modem and my ISP accepted the certificate and gave me an IP address. Unfortunately, I was not able to access the Internet and even using my old router’s MAC address did not work. My guess is that self-signed certificated are used by engineers to test the network and therefore do not allow access to the Internet. It likely also has to do with protections against “simple” cloning. Now my plan is to get a new set of certificates from an unactivated device. I went on eBay and bought a broken SurfBoard SBG6580. The reason for this model is purely because it was the cheapest one I could find. Since it was broken, it is more likely that it’s deactivated. 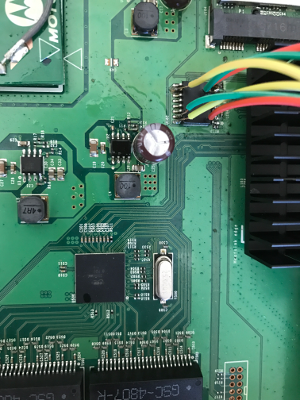 Unfortunately, the FCC does not have the schematics for this device public but a quick inspection showed that the chip labeled Spansion FL128SAIF00 is a 16MiB SPI based flash memory with the datasheet being easily available online. Being a TSOP chip, it is easy enough to solder wires to and luckily I remembered NORway from back when I downgraded my PS3 and that it has SPI dumping support. I connected the Teensy2++ and patched in support for detecting this chip.

binwalk was able to find some embedded certificates

This includes DOCSIS BPI+ certificates for both US and European regions as well as code signing certificates and root certificates. But unfortunately, no private keys. From experience, it seems likely that the private keys would be stored close to the public keys, so I looked in the hex dump for possible candidates. There were blobs of random looking data in between some of the certificates. It also appears that before each certificate is a two-byte length of the DER file. So I was able to parse the NV storage to dump the certificates, some plaintext setting and device information, as well as 0x2A0 sized blobs of data I previously saw. This data can’t be the private exponent of the RSA key because it is too large. It also does not appear to contain any structure, so it can’t have any CRT component of a key. My hypothesis was that it’s an encrypted PKCS#8 RSA private key in DER format. The evidence was that the file size was aligned to an encryption block, that my other modem used PKCS#8 in DER, and that PKCS#8 DER of an RSA1024 key is about 0x279 bytes, which is suspiciously close to 0x2A0 (for comparison, PEM encoded keys are at least 0x394 bytes and PKCS#1 in DER is almost 1KB because of the extra factors).

With that in mind, there is no way around having to reverse the firmware. The last two entries in binwalk showed two large compressed chunks, which is a good start. I found another hacker has dealt with this kind of compression before and the trick was that the header was non-standard (it lacked a valid uncompressed size field). Googling the CPU gave this wiki which asserts that the architecture is big endian MIPS. There were many references to 0x8000.... in the firmware and nothing to 0x7fff...., so I assumed the load address was 0x80000000. Of course, the load address was incorrect but rather than spending time reversing the bootloader, I instead assumed that the load address was page-aligned (because what sane programmer who isn’t thinking about security wouldn’t) and found a random pointer from the code into the large section of strings and incremented the pointer by 0x1000 until I found a string that started at that address. The load address was 0x80004000.

Thankfully there are enough debug strings to narrow down the search for the decryption routine in the 16MiB firmware. By looking for terms like “decrypt” and “bpi” and “private”, I was able to find a function that prints out ******** Private Key Source is ENCRYPTED. (%d BytesUsed)\n as well as @@@@@@@@@ des3ABC_CBC_decrypt() failed @@@@@@@. Seems pretty promising.

From the debug printf, it’s obvious that some blob of data is passed to a function called des3ABC_CBC_decrypt. I assume this means 3DES EDE with a 3-key config. The input key is 21 bytes which is non-standard. Turns out there’s a simple key derivation process (yay security by obscurity) that involves shuffling the key bytes, and subtracting the index from each byte. Then the 21 byte key, which is 8 groups of 7 bits is transformed into the standard representation of 8 groups of 8 bits where each group has a parity check. I’ve included the reversed code below.

With the correct key, I was able to decrypt the 0x2A0 blob which turned out to be (as I suspected) a DER encoded PKCS#8 RSA private key along with a SHA1 hash to authenticate the encryption.

It was a fun journey, but out of caution, I will not be actually using this modem. Cloning MACs is too much intertwined with stealing internet service and although it is not something I ever intend to do, I do not want there to be any confusions between me, the government, and Big ISP. As a result, it was just a fun exercise. As a word of advice to the reader, many people have been arrested for hacking modems. This site does not condone or promote any illegal activities and this post is presented only for education purposes and is more about reversing hardware then it is about bypassing restrictions.

Here’s some “fun facts” I’ve gathered on my journey.